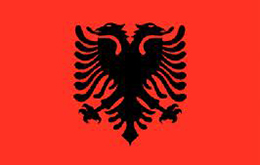 Albanian, which belongs to Satem language group, has no resemblance with any other language, but its development was influenced by all most influential languages in the history - Latin, Ancient Greek, Turkish, Slavic languages ... It is believed that the roots of Albanian are in Baltic languages, and "Albanian " was mentioned for the first time in 1285. The first book in Albanian was written in the 16th century

Our court interpreters for Albanian language are at your disposal when you need: